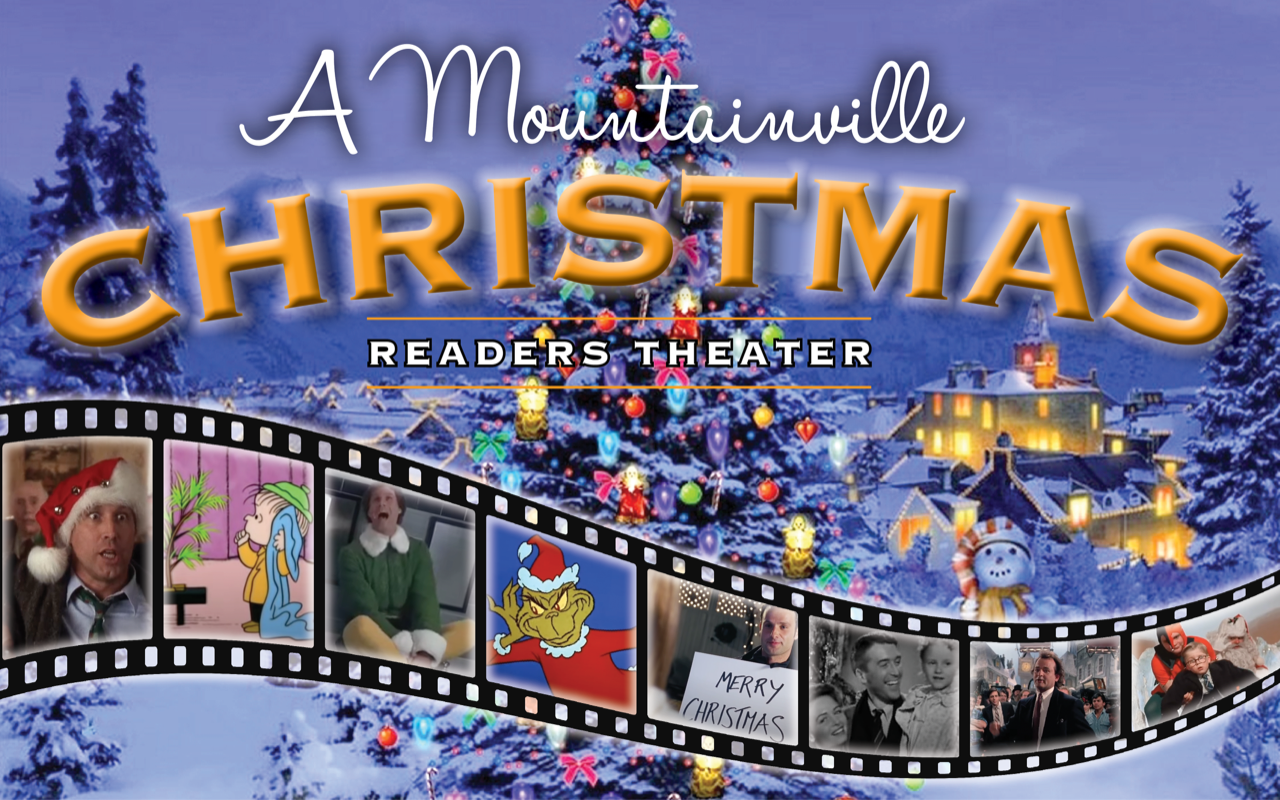 Links to samples of what will be included in the Mountainville Christmas:

The Grinch Who Stole Christmas
https://www.youtube.com/watch?v=hqOOUJFv1n0

An original script written by our own Jack Kennedy, this readers theater will get everyone in their Hallmark-inspired holiday spirit!

All are welcome, no tickets required. Donations will be accepted at the show.

The structure is the old reliable “play within a play,” or in our case “plays within a play.” The production schedule is compressed, with auditions being Monday, Nov. 28, and three rehearsals on Wednesday-Friday, Nov. 30 and Dec. 1, 2. The performance is in the Sanctuary at St. Luke’s on Saturday, Dec. 3. Everything begins at 7 p.m. No memorizing. Bottom line for your scheduling: an audition night on Monday, roles assigned Wednesday based on how many audition (Tuesday is dark), three two-hour rehearsals, and the show, which will be about 75 minutes in length.

The parody is the “wrapper,” or the framing play. Mythical Mountainville, Colorado is our primary setting, and Noelle Snow is our female lead, coming home from New York for the holidays, uneasy about her life in the big city. She has a rich boyfriend but meets an old flame when she gets back in town. Small town life wins out in the end, not surprisingly. The first four pages of the script are attached as a PDF sample that may help you see the “frame.”

The ‘Plays within the Play’

The local theater group is rehearsing for their Christmas Extravaganza. This year the troupe is presenting scenes from famous Christmas movies. We include cuttings from eight films or TV specials. A Word document with links to the scenes is attached, along with an additional PDF of a sample of four pages from the show script (for a scene from Elf).

We hope we will have enough players to split casting between the parody and the famous scenes, but there may be cross-over.

Aurora Teaspoon fills two roles, the narrator for the show and the artistic director for the Mountainville Underground Theater (MUT).
Noelle Snow, aspiring journalist who has been trying to establish herself in NYC, has a boyfriend, and who returns to her hometown of Mountainville to find herself (and eat cookies).
Chad du Pont, rich guy who wants Noelle to marry him and abandon her career. He does not get the girl.
Stanley Snow, Noelle’s dad, and Pam Snow, her mom.
Jesse, Noelle’s long-time friend, who still lives in Mountainville and is “quirky.”
Jake Armstrong, a widower (ah…) with a daughter who owns a coffee shop/book store in town and dated Noelle back in high school.
Paige, Jake’s precocious 10-year-old daughter

These are all to be determined, and some scenes require as many as 15 players in the script. If we have the numbers, those eight scenes will feature various groups from the MUT troupe, with main roles distributed widely. No need for impersonations, but if you ever wanted to share your Jimmy Stewart or Bill Murray, this is the time.

There is some a cappella singing in the Elf shower scene (Jovie and Buddy), and some group singing at times. Nothing too taxing.

Again, auditions are Monday, Nov. 28, at 7 p.m. at St. Luke’s. Nothing to prepare. Full scripts will be distributed. Everyone will get a chance to read multiple parts. All final assignments will be made during the Wednesday night rehearsal.

We hope you can find time to join us in the latest WPTC Readers Theater production. We promise it will be fun.